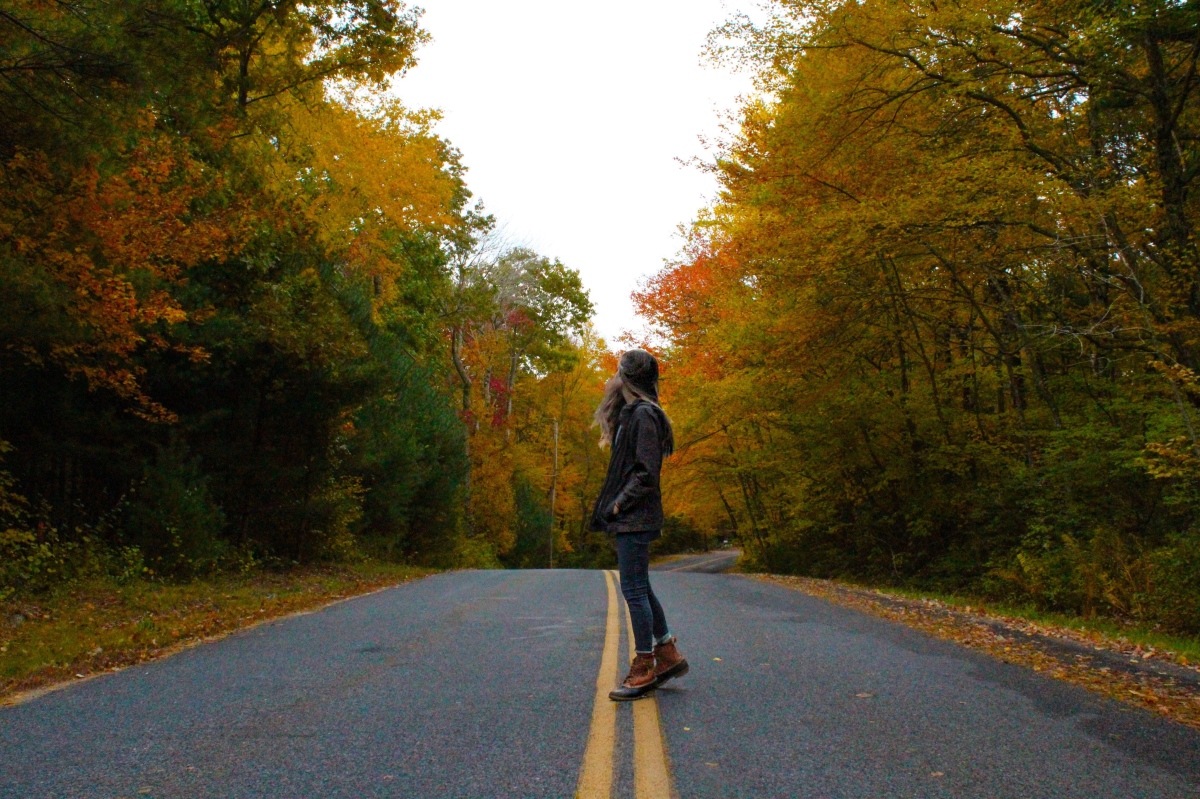 About one month ago I sat on my bed, eager to write a “Christmas Letter” detailing my year. This clearly slipped through the cracks. My bad. To be fair, I try my best to come up with a main idea for each post I write as to not embarrass my previous English teachers, but I struggled to think of a point to make readers reflect on their own years. Unable to come up with any cohesive storyline, I abandoned the post until today. Here’s to a selfish “my year in review” which is sure to entertain. This past year was full of triumphs, setbacks, and one overarching theme that finally became evident with only a few days left to spare: gratefulness.

2018 was another year of growth for me, much as I’m sure it was for you. I began dating, got two (two!) new jobs, moved to Boston from Providence, took the LSAT, and fell in love with Scotland. There were plenty of tears. Some came streaming down my face as I uncontrollably sobbed, wondering if the pain would ever subside. But others, and these are my favorite, came from beautiful moments of unadulterated happiness- such as one of my best friends getting engaged this past September.

Essentially, it’d be silly to characterize the year as either “good” or “bad”. I don’t feel like a year is quantifiable in such terms. Instead I like to rely on more ambiguous I-have-a-liberal-arts-degree questions like What have I learned? Have I loved and been loved? Am I trying to better myself? What makes me happy and why? As we all know, the end of the year is typically a time for reflection, review, and resolutions.

So let’s start with the highlight review reel, the sometimes superficial fluff I’d include in a Christmas letter that’ll lead you to believe my life is flawless, darling: 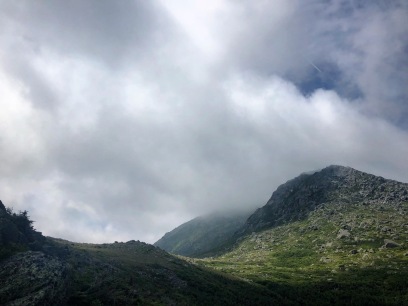 Mount Adams from the Madison Spring Hut in New Hampshire this summer.

I welcomed in the New Year surrounded by friends unlike the previous year and will be in one of these friend’s weddings this May. Photography became my go-to hobby on weekends and I continued to travel New England in search of places to utilize my Canon T5i Rebel’s tripod, having graduated from leaning my iPhone precariously against inanimate objects with a self timer. I secured a new full-time job in a high rise in the heart of downtown Boston. Scotland and London blew my mind in April. I bagged a few additional peaks in the White Mountains this summer and have now summited seven of New Hampshire’s ten highest 40,000 footers, some multiple times, most alone. This September I juggled studying for the LSAT with a full-time job and part-time volleyball coaching gig at Suffolk University. I turned twenty-six this November.

As we all know, pleasure accompanies pain. It’s how we can distinguish feeling between the two. Though 2018 was an overall productive year for me, it was only this way because pain often drove me to make difficult, but necessary choices.

Dating has not come easily to me. I’ve written about this previously, but struggling with your mental health while trying to let another person into your life can be a challenge (it’s a challenge even without a mental health disorder!). I began the year by making myself miserable over a guy who clearly only wanted a casual hookup. I self harmed, closed myself off to friends, and questioned my value as a human being. After some deliberation, I pushed myself to continue dating. This summer I was delighted when I was asked out on a second date with a guy I felt I had a connection with. After a somewhat turbulent, yet sometimes wonderful seven months, the relationship ended amicably. As I sat on my bed crying, I felt a million emotions at once, but self-harm and suicide never once crossed my mind. I felt both relieved and anguish in a beautiful, tragic kind of way, but above anything, grateful. I learned so much through my heartbreak. I’d grown and came to terms with what I consider to be things I am inflexible about in a relationship. I will not beg someone to love me as I have in the past. My self-worth is not determined by anyone other than myself.

Other than dating, the latter half of my year largely revolved around studying for the LSAT (Law School Admission Test). Working as a paralegal over the past year has not satiated my appetite for the legal field, so after many heart-to-hearts with female attorneys I had worked and work with, I signed up to take the September LSAT in August. I’d never considered myself someone who could even dream of being a lawyer, so I kept the fact I was studying for the test quiet for a few weeks until my anxiety really kicked in. Was I too stupid to do well on the test? Did I even have enough time to study? What would people think of me if I didn’t get into a good school? The “what ifs” began making me physically sick, negatively impacting my health as the test approached. I constantly felt nauseous and sick and ended up losing fifteen pounds, but not in a way I was proud of. Finally, test day came and I completely bombed the LSAT. Again, my self-worth came into question.  Was I a piece of sh*t for not scoring what my brother had? How could I have thought this profession was for me?

One of the blessings of working around attorneys is that it forced me to begin thinking more critically and logically. So while faced with a choice, I did what I believed to be necessary for my success. I swallowed my pride and paid half a month’s paycheck to sign up for a class leading up to the next test in January. After busting my ass this winter, I scored three points higher on the midpoint test than I did on the September test. I consider this a small victory. No matter what happens, I know my self-worth is not contingent on a test that asks me questions like, “Where can Polly sit if she can’t sit next to Jeff and Nora?”. CRAZY, right?

In addition to getting comfortable with the idea and practice of dating, I have also come to terms with aspects of my past that I’ve buried for some time. Interpersonal, romantic relationships had been a violent, emotional struggle for me while growing up. I grew up believing I was “sick” and “unnatural” because I was attracted to both sexes. I beat myself up and spent a large majority of my highschool career and a few years in college terrified someone would find this out. After thirteen years (yes, I knew as early as 7th grade), I finally began identifying myself as pansexual if asked. I no longer feel frightened or disgusted by something that I consider naturally a part of me and who I’ve always been. I’ve never felt the need to proclaim this or make a statement about it, but my point is that 2018 was the first year I am not afraid to admit it. I have nothing to apologize for. For this realization, I am immensely grateful. 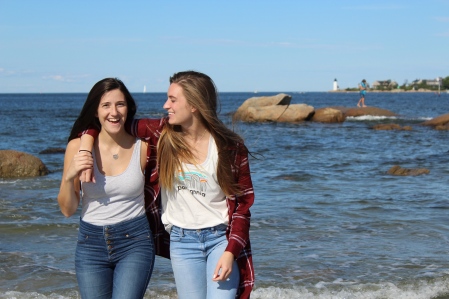 While visiting my sister this Christmas, I walked into her room to get a grip on the new condo she now inhabited (my parents moved to Georgia this fall leaving Alli in Wisconsin to finish up her master’s). I sat on her bed slowly, wrapped in a warm towel, still sopping wet from the shower. As tendrils of water from my hair snaked down my back, a small handwritten note caught my eye.

I am grateful for my struggle because without it I wouldn’t have stumbled across my strength.

I’m still kind of unsure of my strengths in life, but I know 2018 has pushed me to my limits. I’ve felt emotions I was unaware I could even feel until this year. Some came from simply gazing upon peaks of summits shrouded in cloud, others from allowing myself to become intimately vulnerable with another human being. It’s been a year of pain, bliss, stress, joy, and everything in between. For all these things, I am grateful because it’s allowed me to live my life to the fullest. We call can’t be sure we will be granted another trip around the sun, but we sure as sh*t can be sure of making what we can of the life that was given to us. 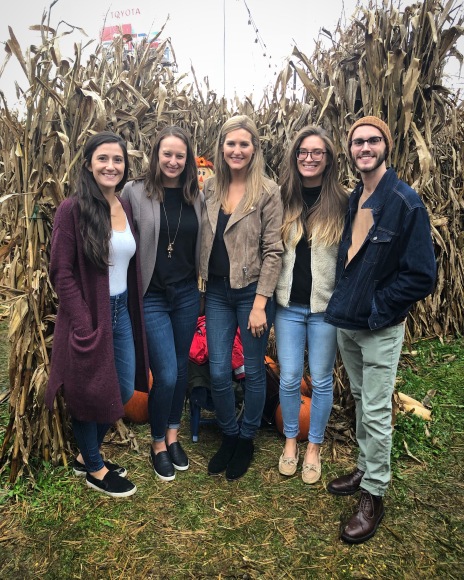 When one member of the squad gets engaged, we all get engaged.